[NB. New website in development for launch in March 2022, this is one no longer being regularly updated.]

I was raised in the southern US state of Kentucky on a 12 acre farm nestled into the city of Louisville. I continue to be an avid horse rider, right now of a white Irish Draft/Thoroughbred mare named Miss Marple. Since the age of 17, I have studied and lived abroad, respectively, in India, the Pacific Northwest, Great Britain, and The Netherlands. Travel remains a passion of mine.

I am Associate Professor Gender and Diversity Studies based in the Literature and Art Department at the Faculty of Arts and Social Sciences of Maastricht University. I belong to the Centre for Gender and Diversity and serve on the University’s Advisory Council for Diversity and Inclusivity, chaired by the rector. Currently I am supervising PhDs on topics of queering the museum (Liang-kai Yu), LGBTQ archives (Noah Littel), Chinese beauty blogs (Zexu Guan), queer-baiting in Chinese online culture (Wenxuan Peng), intersectional South African short stories (Robyn Ausmeier), Lebanese on/offline art activism (Sinine Nakhle), Kathy Acker’s remaking of sexuality and auto-theory  (Tessel Veneboer), sodomitical assemblages in the Dutch Golden Age (Thato Magano), feminist politics of care in artist wills and last testaments (Valentina Curandi).

I am committed in my work to map out the interconnections of social realities with cultural productions, that is, how art-making can be socially embedded and culturally responsive. This synergy is also my lived reality as I have long collaborated on film festivals and art exhibitions that aim to improve the visibility of gender diversity (2003-present).

My long-time interest in transgender studies is due to the way it potentially innovates any discipline by challenging assumptions of binary organization of people, knowledge, and hierarchies. My research analyzes trans cultural production to understand how frameworks of visuality embedded in specific visual mediums shape one’s reading of bodily difference. I aim to affirm representations of trans embodiment while accounting for the difficulties of being seen as a legitimate person. I also identify as a non-binary trans person –some might say as genderqueer– and use the pronouns they/them/their. I describe my attitude towards my profession as “me-search” in the preface to my 2019 book Shimmering Images (Duke University Press).

From 2013-2020, I served as the first editor of arts and culture for TSQ: Transgender Studies Quarterly and now stepped onto the editorial board.  Together with Jian Neo chen and Susan Stryker I am co-editor of Duke University Press’s new book series ASTERISK: Gender, Trans-, and All That Comes After. I am a founding editorial board member for the open access journal Capacious: Journal for Emerging Affective Inquiry, currently helping set up the journal Culture Caleidoscoop as a member of the Advisory Collective, and am one of the managing co-editors of Museum & Society (University of Leicester).

Nationally I serve as a board member of the national research school NICA: National Institute for Cultural Analysis. Previously I was on the Education Commission (Onderwijsraad) for the The Netherlands Research School of Gender Studies (NOG), which is the national affiliation body for all Research MA students, PhDs and faculty in Gender, Ethnicity and Diversity Studies. As a member of the Advisory Board of the NIAS-Lorentz International Science Center I evaluate various kinds of applications for interdisciplinary scholarship and activities. I am also a scientific member of the Advisory Board to the Queering the Collections (QTC) Network of The Netherlands.

I am the project leader the NWO Smart Culture project “The Critical Visitor: Intersectional Approaches for Rethinking and Retooling Accessibility and Inclusivity in Heritage Spaces” (2020-2025). The Critical Visitor investigates how heritage institutions can achieve inclusion and accessibility within their organization, collection, and exhibition spaces that meets the breadth of demands placed by today’s “critical visitors.” Fifteen heritage partners collaborate on activities to develop language and tools that dismantle intersecting oppressions, forms of exclusion, and marginalization. The project asks, “How can initiatives in the Dutch cultural sector become more intersectional, in the sense of developing multi-issue approaches to inclusion and accessibility?” Like our Facebook page to get updates on our activities.

I am an active member of a number of scholarly, activist and cultural organizations. 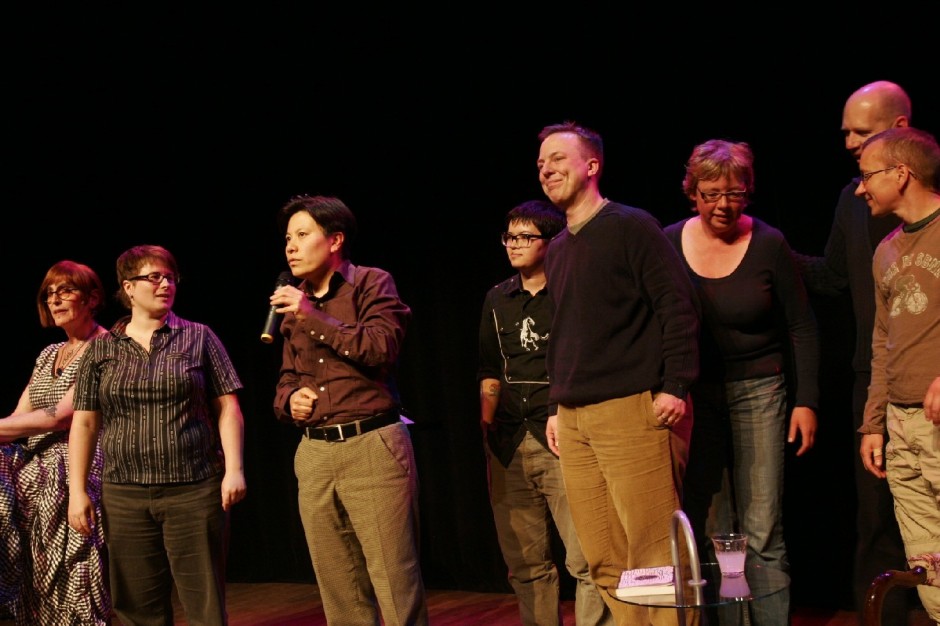 I’ve had the opportunity to speak in public forums with audiences from around the world. Here are some images and interviews taken from these occasions.

Review of my talk on Chris Rijksen’s photographic exhibition opening at IHLIA (January 21, 2013)

Trans-ErotiXXX workshop, “Get Bent! A Festival of Queer Diversity” (Manchester, 2007)